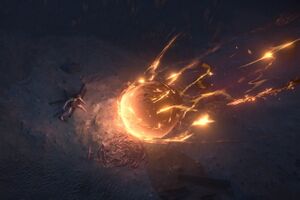 Firestorm is a spell that rains numerous fiery bolts in an area, each bolt dealing area of effect fire damage.

Area of Effect: Increased AoE will increase both the area in which the fireballs randomly fall and also the radius of the individual fireball damage. Full spell damage is done at any point within the AoE of a fireball, however due to the fact that enemies take up an area and not simply a point, less spell damage is dealt to any given enemy as area increases. For this reason increasing the AoE of Firestorm paradoxically decreases the average damage dealt to a single target.

Duration: Increasing duration with either supports or passives will increase the total number of fireballs that fall before the spell ends.

Damage Effectiveness: Damage from secondary sources like 'added damage' supports or heralds applies at only 80% of their listed value.

Firestorm can be created from the following recipes: