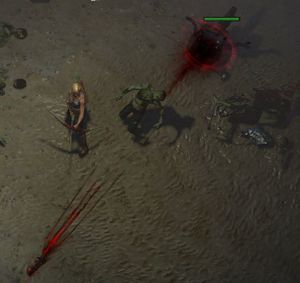 Siege Ballista is a bow attack skill. It summons a ballista totem that fires a powerful, piercing bolt after a build-up time. The bolts scale on the player's weapon damage. The totem suffers an attack speed penalty but deals increased base damage. Siege Ballista's range is 80 units.

Ballista: Siege Ballista is part of the ballista sub-class of totems. Ballista totems have inherent added totem limit. They have a much shorter summoning range, spawning much closer to the summoner.

Bow: Siege Ballista requires that a bow is equipped in order to be cast and has a Bow Gem tag.

Since Siege Ballista's attacks are also bow attacks, effects such as Point Blank and

close range bonus apply. For the range-dependent effects, bonus damage is based on the target's distance from the totem making the attacks.

, one can summon 1 additional Siege Ballista Totem per 200 Dexterity.

Siege Ballista can be created from the following recipes: