Additional Effects per 1% Quality:
1% increased totem lifePlace into an item socket of the right colour to gain this skill. Right click to remove from a socket. 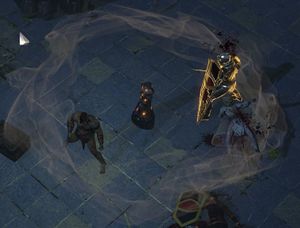 Shockwave Totem is a spell skill. It summons a totem that releases shockwaves that deal physical damage around it.

The damage done by Shockwave Totem is Spell, AoE, Totem and Physical damage, so modifiers to any of these will increase it. As the damage is Physical, it will not benefit from Elemental Spell Damage nodes. Totem range is 80.

Physical Damage: Because Shockwave Totem deals physical damage it can be boosted by supports and passive skills that are more commonly used to modify attacks, such as the Added Fire Damage support gem or passive skills which grant Physical Damage with no other qualifier, such as Path of the Warrior.

Knockback Distance: As skills cast by the totem are affected by all modifiers affecting the player, the knockback distance also gets increased by your passives.

Shockwave Totem can be created from the following recipes:

The following unique items are related to Shockwave Totem: