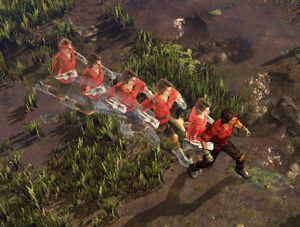 Dash is a blink / movement / travel skill which causes the skill user to quickly move in the target direction.

Description: When the skill is cast, the user teleports in the direction of the cursor. If Attack In Place is held down, the user teleports opposite the direction. Despite the description saying the user "performs a series of quick teleports", the gem by default only has one use before one must wait for the cooldown to use it again. Its range is short at level 1 and gains increased travel distance with further levels.

Dash can be created from the following recipes: