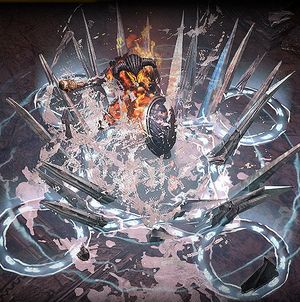 Ice Crash is an attack skill that strikes the ground, converting your physical damage to cold damage, and creating a wave of expanding icicles in an area around you. The damage is weaker further away from you. Ice Crash requires a sword, mace, axe or a staff, but can also be used while unarmed.

Any enemy hit by a stage cannot be hit again by subsequent stage(s). The tooltip damage reported is for the first (central) stage.[1]

Ice Crash can be created from the following recipes: