Additional Effects per 1% Quality:
2% increased Shock Duration on enemiesRing Shocks as if dealing 5% more Damage1% increased Lightning DamagePlace into an item socket of the right colour to gain this skill. Right click to remove from a socket. 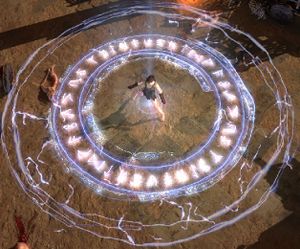 Shock Nova is a lightning area of effect spell that deals lightning damage in an area around the caster, conjuring an initial ring followed by a larger circular area. Shock Nova has an innate chance to inflict shock and provides increased effectiveness of this ailment with higher gem levels. 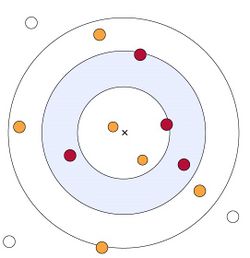 Shock Nova has two damaging components: an initial ring, and then a larger, circular area - both dealing the same lightning damage. The initial ring has a fixed width (additional AOE scales the distance the ring appears from the caster and the outer circumference of the ring, but does not widen the ring's thickness), and monsters located within its area get hit by it. The subsequent damaging area has a larger radius than the initial ring, and all monsters located between the spell's center (the caster by default) up to that radius get hit. Therefore it is possible for monsters to receive damage from either both components[1], or just the larger area effect, if standing too close or too far away (see the image below for reference). Both parts of the spell can be independently blocked by monsters capable of blocking spells.

Added damage to spells benefits both the ring and larger pulse, giving this skill a 380% effectiveness of added damage per cast if both components hit. Thus, for optimal damage on single targets, the caster must position themselves at the correct distance away from their target.

Shock Nova can be created from the following recipes: