Additional Effects per 1% Quality:
0.5% increased Movement SpeedPlace into an item socket of the right colour to gain this skill. Right click to remove from a socket. 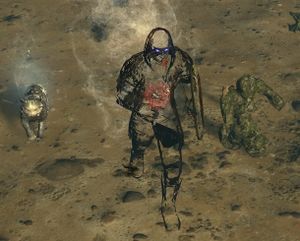 Phase Run is a skill gem that applies a buff to the character that grants increased movement speed, increased stealth, and Phasing. Using any skill while Phase Run is active will replace the primary buff with a secondary buff that grants more melee damage for a shorter duration. Phase Run consumes Frenzy Charges to increase its duration.

Despite the skill's tooltip suggesting otherwise, the Melee Damage buff from Phase Run is present during both the primary and secondary buffs.

Additional Effects per 1% Quality:
Supported Skills have 0.5% increased Skill Effect DurationThis is a Support Gem. It does not grant a bonus to your character, but to skills in sockets connected to it. Place into an item socket connected to a socket containing the Active Skill Gem you wish to augment. Right click to remove from a socket.

gem and Frenzy charges will increase/decrease the duration of both the primary and secondary buffs.

Trigger Gems: When linked to a Trigger Support gem, Phase Run should be placed as the last skill gem to be triggered, because otherwise the primary buff (movement speed) will be cancelled by any intervening skills and be replaced by the secondary buff (melee damage).

Damage - The more melee physical damage modifier will apply for a base duration of .2 seconds after the character uses a skill other than phase run. For most attacks this doesn't matter, because most attacks calculate their damage the moment you use them, however

Flicker StrikeFlicker StrikeAttack, Melee, Strike, Movement, Duration
Level: (1-20)
Cost: 10 Mana
Cooldown Time: 2.00 sec
Can Store 1 Use(s)
Attack Speed: 120% of base
Attack Damage: (142-210)% of base
Effectiveness of Added Damage: (142-210)%Requires Level 10Teleports the character to a nearby monster and attacks with a melee weapon. If no specific monster is targeted, one is picked at random. Grants a buff that increases movement speed for a duration. The cooldown can be bypassed by expending a Frenzy Charge.10% increased Attack Speed per Frenzy Charge
15% chance to gain a Frenzy Charge on Hit
Buff grants 20% increased Movement Speed
Base duration is 3 seconds

Additional Effects per 1% Quality:
0.25% chance to gain a Frenzy Charge on HitPlace into an item socket of the right colour to gain this skill. Right click to remove from a socket.

does not calculate the damage until you teleport.[1] When using an attack that snapshots the damage bonus will apply to the entire duration of the attack.

Phase Run can be created from the following recipes: