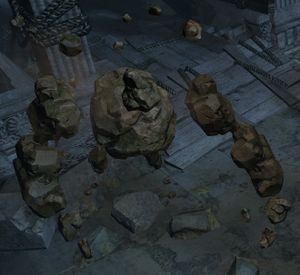 Summon Stone Golem is a minion spell skill. It summons a Golem that grants life regeneration to the player while active. The Stone Golem can use a rolling movement skill and a taunting AoE ground slam in addition to its melee attacks. It has the largest life pool of all available Golems, but, unlike the others, it does not have any energy shield.

The golem can use the following skills:

Summon Stone Golem can be created from the following recipes: