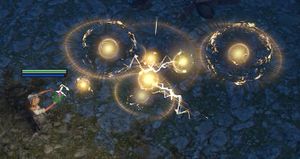 Storm Burst is a Spell Channelling skill that creates orbs of energy which deal Physical damage, half of which is converted to Lightning damage, in an Area of effect. The orbs deal damage at an interval of 0.4 seconds over a Duration of 1.2 seconds.

Channelling Storm Burst creates a cluster of pulsing orbs that follow the mouse pointer. Enemies can be hit by multiple orbs, but the orbs spawn in a spread out pattern resembling buckshot.

Each orb created has its own duration tracker. Every 0.4 seconds, the orbs will jump to a new location around the cursor and create an explosion. This 0.4 seconds interval is independent for each orb.

Storm Burst can be created from the following recipes: