Additional Effects per 1% Quality:
1% chance to Shock enemies1% less Skill Effect Duration
3% increased Cooldown Recovery Rate0.5% chance to Hinder Enemies on HitPlace into an item socket of the right colour to gain this skill. Right click to remove from a socket. 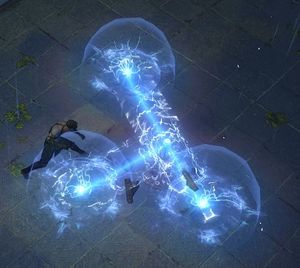 Not to be confused with Lightning Trap.

Lightning Spire Trap is a lightning spell that throws a trap. When activated, the trap spawns a spire that strikes random areas around it for the duration, dealing lightning damage in an area.

Area of Effect: Area of effect modifiers for Lightning Spire Trap do not increase the overall area of the skill, but rather only scale the radius of the impact sites themselves. Because of this interaction, increased area of effect will increase the amount of overlapping damage zones rather than spread them apart.

If lightning spire trap does not have enough room to land in its maximum range, it will land its hits where it can. Therefore small spaces are more likely to cause all hits to hit the same enemy.

Lightning Spire Trap can be created from the following recipes: