Consecrated PathFire, Attack, AoE, Movement, Duration, Slam, Melee
Level: (1-20)
Cost: 8 Mana
Attack Speed: 80% of base
Attack Damage: (150-230)% of base
Effectiveness of Added Damage: (150-230)%Requires Level 28Slams the ground at a targeted location. If an enemy is near where you target, you'll teleport to it from a short distance away, slam, and create an area of consecrated ground. Can't be supported by Multistrike, and requires a Sword, Axe, Mace, Sceptre, Staff or Unarmed.Base duration is 4 seconds
50% of Physical Damage Converted to Fire Damage
Deals up to 20% more Damage to closer targets 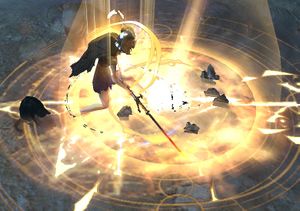 Consecrated Path is a attack skill where the user strikes the ground to deal physical damage converted to fire damage around the user and create consecrated ground. When targeting distant enemies, the user will teleport to the target.

Consecrated Path can be created from the following recipes: