Ascendancy classes are subclasses that grant an access to an Ascendancy skill tree specific for the character class chosen.

Nineteen souls survived the Trials of Ascendancy. Nineteen men and women stood at the gates of the Lord's Labyrinth. Nineteen challengers whose exceptional martial and mystical talents still linger long after their death.

to access, is completed, which means players can spend a total of eight Ascendancy skill points.[2] 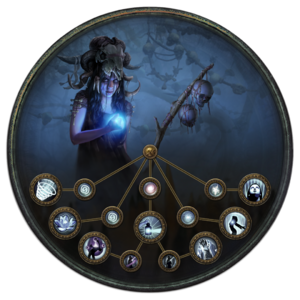 Ascendancy passive skills are significantly more powerful than regular passive skills and will heavily impact the way a character is played. A character can only spend a maximum of eight points on the tree; however, the last two points are not available until significantly later when end-game maps can be cleared. Aside from the Ascendant's, the skill trees also follow a certain format. Most classes have 12 to 16 passive skills in each tree, and each potent "notable" skill is gated by a generic, lesser node, so it takes two points to reach them. Certain notables require the player to allocate another notable first, so they take up four points. A character will only be able to have one four-pointer skill until the Eternal Labyrinth is cleared.

Refunding one Ascendancy skill point requires five regular refund points. When all points are refunded, use the Altar of Ascendancy in the Labyrinth treasure room in any difficulty to select a new Ascendancy class.