In the Sentinel Challenge League, ancient constructs have been unearthed across Wraeclast. You will harness the power of these Sentinels to control your level of risk and reward on the battlefield. When deployed, they follow you for a short time and empower your enemies, greatly increasing both their difficulty and reward. 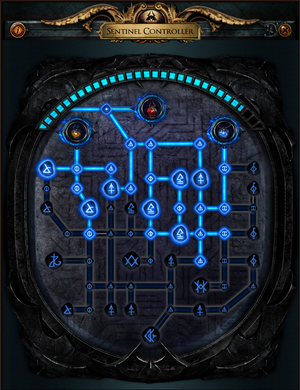 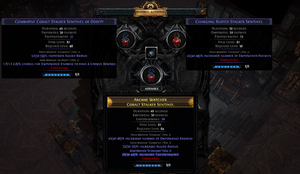 Sentinels can be found as a drop from enemies or from Sentinel Caches that occasionally spawn in zones. The first time you open a Sentinel Cache, a Sentinel Controller will drop, allowing you to equip Sentinels. Sentinels mods cannot be modified via crafting. There are three types of Sentinels that can be equipped: Stalker (red), Apex (yellow), and Pandemonium (blue).

When a Sentinel is activated, it will follow you and fire beams at nearby enemies to empower them, restoring it to full life and giving it an Empowerment buff, increasing the monsters' damage dealt and lessening their damage taken while increasing experience and item yield based on the Empowerment degree. Empowered monsters will sometimes drop an additional reward, indicated by its icon. Each Sentinel can be activated once per zone and disappears after it fires the designated number of beams, has its duration run out, or when the user dies.

The Sentinel Controllers allows you to allocate passive bonuses to Sentinels by wiring Filaments. Each Filament takes one Power to charge, which is gain by killing empowered enemies, acting much like Experience Points. You can add and remove Filaments freely. You can make changes to the Sentinel Controller configuration anywhere, but the changes will not be applied until you move to the next zone.

Sentinels have a limited number of charges that dictate how many times it can be activated. There is no way to add charges back into a Sentinel. The only use for depleted Sentinels is to use a Power Core to combine two different Sentinels to create a new, fully charged Sentinel with a combination of mods from the two.

Empowered enemies can rarely drop Recombinators, which lets you combine two equipment of the specified type to create a new item with a combination of the mods from the components, much like Power Cores.