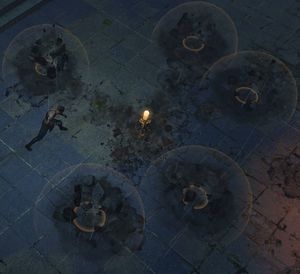 Seismic Trap is a spell skill that throws a trap when activated, releases multiple shockwaves that deal physical damage for its duration.

Once the trap is triggered, it will spawn a seismic device in its triggered location. This device releases several waves every 0.9 seconds.

You can improve the DPS (damage per second) in different ways:

Because the seismic device spawns waves around it, you can maximize overlap (and therefore, DPS) by throwing the traps around the mob instead of throwing them at the mob's feet.

However, this changes with enough AoE. [1]

Seismic Trap can be created from the following recipes: