Leap SlamAttack, AoE, Movement, Travel, Slam, Melee
Level: (1-20)
Cost: 10 Mana
Attack Damage: (100-150)% of base
Effectiveness of Added Damage: (100-150)%
Radius: 15Requires Level 10Jump into the air, damaging and knocking back enemies with your weapon where you land. Enemies you would land on are pushed out of the way. Requires an Axe, Mace, Sceptre, Sword or Staff. Cannot be supported by Multistrike.Per 1% Quality:1Superior2Anomalous3Divergent4Phantasmal1% increased Stun Duration on enemies1% increased Area of Effect1% increased Damage0.5% increased Attack Speed+0.55 seconds to Attack Time
(20-39)% increased Stun Duration against Enemies that are on Full Life
Damaging Hits always Stun Enemies that are on Full LifePlace into an item socket of the right colour to gain this skill. Right click to remove from a socket. 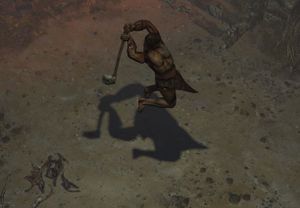 Leap Slam is an attack skill that performs a leap to a target area, damaging and knocking back enemies landed on. It is guaranteed to stun enemies at full life.

Attack speed can be calculated with this formula:

, where W is the weapon's attack speed after local modifiers have been taken into account.

Leap Slam is primarily used as a movement skill. Leap Slam can be used to cross cliffs, chasms, and obstacles.

is a good support for this purpose as it will increase the speed of travel.

Leap Slam can be created from the following recipes: